After falling in his opening-round match, Prehar won his next two matches with falls before defeating Dallas Molina’s Arza Brown by a major decision score of 17-9 to claim fifth place.

Hagen Shipley (120 pounds), Jefferson Guerrero (152), and Luke Norton (182) each advanced to the quarterfinals in their respective weight classes before being defeated to move into the consolation bracket. Shipley earned a technical fall over Carrollton Creekview’s Steven Smith in his first match of the day with a score of 19-3. Guerrero won with an 11-7 decision over Vernon’s Andrew Czelusta and Norton claimed a 5-2 decision over Huntsville’s Troy Joseph in their first matches.

Alyson Brownson-Welch (128) also advanced to the consolation semifinals, earning a fall over McAllen’s Mariana Bocanegra. She totaled three points as the lone female competitor for DSHS, becoming just the second girl in school history to score points at the state tournament.

Complete results from the UIL State Tournament can be found here. 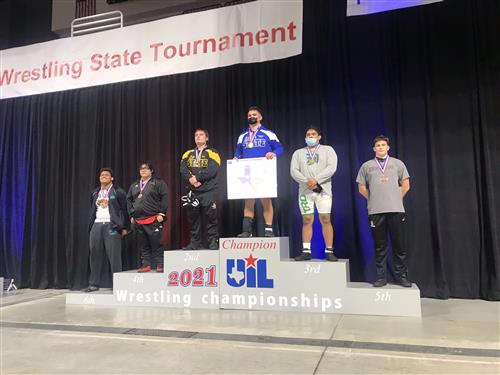