The following story is the second installment in the Tiger Student Spotlight series where DSISD features students from each of the district’s seven campuses.

More than two years ago, a rare opportunity sprung up for Walnut Springs Elementary fourth-grader Preston Alkire – a chance to star in an independent short film shooting in and around Hays County.

The movie “Clod” was written by Clayton Jones, a Hays High School alumnus and who played Alkire’s father in the movie. Alkire secured the part knowing one of Jones’ relatives and auditioning for the role.

“One day I was at my friend Tanner’s house and his mom came up to me and asked if I wanted to be in a movie,” Alkire said. “I did the movie and kept on taking acting classes and theatre so that’s how I got into acting.”

The 15-minute film focuses on life in small-town Texas with Alkire playing the role of Kip, a young boy who often gets into trouble. 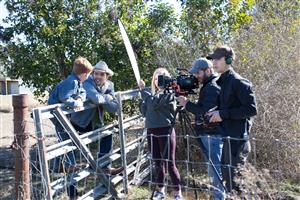 “We had a great time on set,” Jones said. “It was Preston’s first time acting but I think that was an asset because it allowed him to be fresh and spontaneous with what we were doing. The fun that he was having on set was so apparent.”

Alkire said the opportunity was a memorable experience including attending a cattle auction for the first time.

“It was a fun experience. I got to make a lot of friends so we keep in touch,” Alkire said. “We got to go to an auction, which I had never been to until that time. “The funny thing is when we went to the auction I heard what it was for. I didn’t eat meat for two months because I was sad about it.”

The film earned Alkire a nomination for Best Lead Actor in a short film at the International Christian Film and Music Festival in 2020. 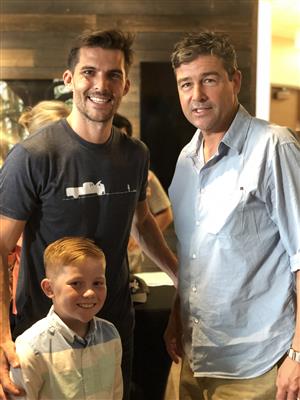 “It was really cool the day my mom showed me the news reporter showing best short film actors,” Alkire said. “It got me really excited with the news saying my name.”

“Clod” is based on a true story about Jones’ uncle and grandfather living in Kyle.

“He (Preston) really jumped in with both feet,” Jones said. “We still keep in touch and that chemistry in the film is one of the reasons why. Preston is such a caring person who can make a friend so fast.”

Alkire continues to take acting classes and aspires to act through college before becoming a director one day.

“I think Preston has a really great future,” Jones said. “Child actors are really rare. I think once somebody else discovers Preston he’s going to have a really great career.”