The following story is the second installment in the Tiger Staff Spotlight series where DSISD features staff members from each of the district’s seven campuses. 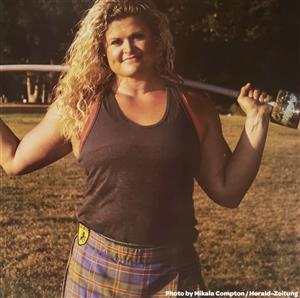 Growing up in an athletic family, Dripping Springs Middle School history teacher Olivia Tyler didn’t hesitate to try a new sport when she picked up a discus in middle school. Little did she know it would lead to a world championship, in a pretty unusual event.

Tyler excelled so much in track and field that she lettered four years at Texas Tech University, competing in discus, hammer throw and weight throw for the Red Raiders. 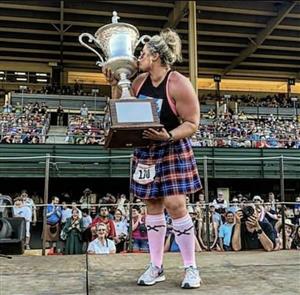 “You wear a kilt and usually kilt hose, also known as tall socks, and you throw in nine events all day long with three attempts in each event,” Tyler said. “It’s a lot of throwing. It’s very different than a traditional track meet.”

Since 2012, Tyler has traveled all over the world competing in the Highland Games with trips to Norway, Scotland and Canada.

In 2018, Tyler’s commitment to the sport paid off when she claimed the Women’s Highland Games World Championship. The event, which was held in Broken Arrow, Okla., featured Tyler’s world record-breaking performance of 35 feet, 3 inches in the sheaf toss.

“We were all trading off wins at the time so I knew I had a good chance (at winning),” Tyler said. “Then, by the time I got into day two, I was pretty certain I was going to win.”

In 2019, life took an unexpected turn as Tyler was diagnosed with thyroid cancer, putting a brief pause to her competition schedule. 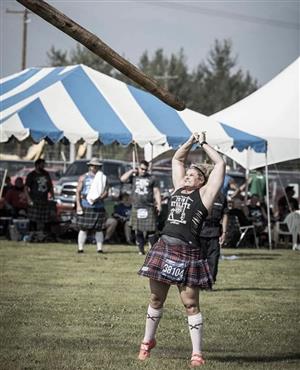 “When I won my world championship, I didn’t know at the time, but I had thyroid cancer,” Tyler said. “My neck was getting large and it turns out I had a pretty large tumor. They took it out in May of 2019 and I recovered and six weeks later I threw in Alaska.”

After spending more than seven years as a stay-at-home mom, Tyler joined the DSMS staff in October of 2020.

“I did a couple of (other) interviews and didn’t think they were a good fit, then I got a call from Dripping Springs Middle School,” Tyler said. “They had a seventh- and eighth-grade history teacher job open and needed somebody. It was like a perfect fit. The kids are great and I really enjoy who I work with.”

As with so many other events, the Highland Games were paused by COVID. Moving forward, Tyler will consider ways to balance her teaching position, her family, and her talents in such an unusual sporting event.