The following story is the first installment in the Tiger Staff Spotlight series where DSISD will feature staff members from each of the district’s seven campuses. 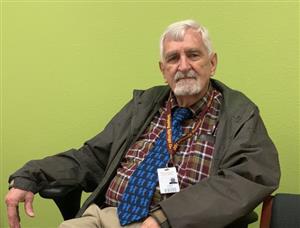 While Spear has worn many different hats during his career from working in politics and serving as a minster … to working as a naturalist and teaching people how to survive harsh climates … teaching has been an important component of the roles in which he has served.

“Everything I’ve ever done, I have taught. That’s my life,” Spear said.

While working as a traveling consultant for the Southern Baptist Convention (SBC) Sunday School Board, Spear’s interest in politics was sparked after being introduced to former president Jimmy Carter, who was the governor of Georgia at the time. “After I met Carter, we built a fellowship together and I visited his house many times,” Spear said.

That connection led Spear to being elected and serving two years on a committee that put forward names for state legislator positions, eventually leading to the successful campaign for a Louisiana Supreme Court Judge.

After three decades as a minister and working with the SBC, Spear became a high school teacher for 13 years in Georgia. He then served as a naturalist for five years for the Georgia Parks and Historical Sites at Fort Mountain State Park, teaching Native American folklore and all areas of nature.

For more than 50 years, Spear has taught wilderness survival and has brought some of those lessons into his role at Rooster Springs Elementary, most recently teaching students about the compass at the beginning of the semester.

“I grew up camping and being outdoors,” Spear said. “I became a member of the American Camping Association, which has a plateau of achievements. I went through that plateau, then got more involved and began to learn about survival skills through that organization. It eventually turned into me teaching survival skills in high elements.”

Spear’s extensive experience with survival skills has led him to write a book on the topic.

“I’m publishing a book on survival skills, not only in high elements but how to make a fire without matches and how to read a compass,” Spear said. “Too many kids today are indoors. They need to be outdoors. I want to teach outdoor skills and how to enjoy the outdoors.”

When he and his wife first settled in Texas in 2016 to be closer to their grandchildren, Spear quickly learned retirement was not for him. He served as a substitute teacher for two years, then worked for Goodwill before getting a call from Rooster Springs about a job opening.

“I was never satisfied just sitting home,” Spear said. “It wasn’t for me.”

Spear’s experience has been a blessing to Rooster Springs with administrators and teachers expressing their gratitude for his help during an unprecedented school year.

“Mr. Spear has been an amazing addition to the Rooster Springs family,” said principal Steve Novickas. “He brings so much knowledge and expertise to our building. He has a wide variety of experiences and passions. Just sitting down and having a conversation with him is amazing to see what he has done in his lifetime.”

While teaching has been a life-long career for Spear, teaching younger kids is something that is new to Spear, but an experience that has brought him much joy.

“I have enjoyed teaching my whole life. Most of the people I’ve taught were adults or high school kids or middle school kids. I have taught younger kids but not on a grander scale,” Spear said. “But here, I love it. These kids are so ingenious and smart. I have to think their parents are doing a good job of rearing them because it’s a joy teaching here. I’ve always taught and I enjoy teaching and I will until the day I die probably.”