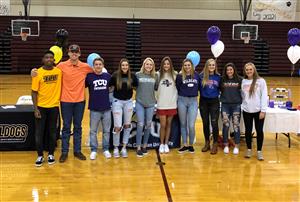 Danny Henry, Swimming, TCU
A four-year varsity swimmer, Danny Henry holds DSHS school records in the 500 Freestyle, the 400 Freestyle Relay and the 200 Individual Medley (set Nov. 8, 2019). He finished fifth at the 2019 State Championships in the 500 Freestyle. Besides swimming for DSHS, Danny swims for Longhorn Aquatics at UT. At the USA Swimming Futures Championships in Des Moines last August, he finished fifth in the 800 Freestyle to qualify for Winter Junior Nationals. Voted as a captain by his teammates this year, Danny is the son of Anna and Richard Henry. He plans to major in Business at TCU. Coach: Andrea McCarthy.

Emma Jones, Soccer, Southeastern Louisiana University
A four-year varsity letterwinner at center defender, Emma Jones was a team leader for last year’s Tiger squad that advanced to the state semi-finals. In 2019, she was named to the All-State First Team, the All-Centex Team (Austin American-Statesman), and the All-District First Team. With Emma on the field as a defender, DSHS has posted 17 shutouts. Emma scored four goals off corner kicks, one of which was at the regional final game, and scored her two penalty kicks in tie-breakers at the regional semi-final and final games. The daughter of Cathy and Brian Jones, she was selected as the top defender at the 2019 EXOS Elite Showcase Camp. Emma, who is involved with YoungLife, plans to major in Kinesiology/Sports Medicine. Coach: Bailey Perrine.

Avery Kalsu, Volleyball, University of Tulsa
Avery Kalsu has been a  four-year varsity starter during a stretch when the Tigers have been undefeated in district play, winning four straight district titles. Last year she was named to the 5A/6A All-State Team, selected to play in the State All-Star Game, and was the Centex Player of the Year (Austin American-Statesman). Avery also was the District Most Valuable Player and the VYPE Texas Utility Player of the Year. As a sophomore, she was honored as the District Setter of the Year after being named District Newcomer of the Year in 2016. She also has earned academic all-district honors every year, ranks in the top 10 percent of her class, and was named 2019 Outstanding Physics Student. Avery also is a decorated track athlete who owns the school 400-Meter record and placed fourth in the state in that event last spring. She was the 2018-19 All-Centex Female Athlete of the Year (all sports). A member of the Austin Performance volleyball club for nine years, Avery’s teams have been honored at many tournaments, including a Silver Medal at the 2019 Southern California Qualifier (USA Division).  The daughter of Tara and James Kalsu, she also has competed on the Unified Champions Special Olympics team. She plans to major in Health Science.  Coach: Michael Kane.

Mikayla Kanetzky, Softball, University of Texas at Dallas
As a pitcher, Mikayla Kanetzky started four games last year and posted a 3-0 record and 2.57 earned-run average with 11 strikeouts. She also has played in the outfield and at second base for the Tigers; this coming spring she is expected to see time at both first and third base in addition to pitching. She plans to major in Accounting at the University of Texas at Dallas.  Mikayla is the daughter of Kimberly and Michael Kanetzky.  Coach: Wade Womack.

Mackenzie Murray, Volleyball, Louisiana Tech University
An outside hitter and defensive specialist for the Tigers, Mackenzie Murray currently leads the team in both kills (389) and kills per set (3.4) this season. She also led DSHS in both categories as a junior, on the way to being named to the All-District First Team and the All-Hays Free Press First Team. Mackenzie also earned academic all-district honors. During her career at DSHS, the Tigers have been undefeated in district play, won four straight district titles, advanced to regional play four consecutive years, and advanced to the 2018 State Tournament. The daughter of Jennifer and James Murray, she also serves as a student mentor in the DSHS Unified Champions program. She plans to study Biology or Nursing at La Tech.  Coach: Michael Kane.

Sarah Nading, Volleyball, Abilene Christian University
A four-year letterwinner, Sarah Nading is ranked among the team leaders in assists (720) and service aces (49). Last year she earned a spot on the Texas Girls Coaches Association All-State Team and was an alternate to the TGCA All-Star Game. Sarah was named to the 2018 All-District First Team and the All-Centex Team (Austin American-Statesman). She also was recognized as the District’s Most Valuable Setter. During her career at DSHS, the Tigers have been undefeated in district play, won four straight district titles, advanced to regional play four consecutive years, and advanced to the 2018 State Tournament. She played club volleyball with Austin Performance for seven years. The daughter of Sharon and Lyle Nading, Sarah also has earned academic all-district honors. Coach: Michael Kane.

Xavier Phillips, Basketball, Texas Lutheran University
Xavier is a three-year letterman and two-year starter for the Tigers basketball team.  A guard, he was named to the All-District Second Team as a junior after averaging 8.5 points, 4 rebounds, and 2 assists per game. The son of Nikita and Archie Phillips, he plans to major in Kinesiology at TLU. Coach: Craig Swannack.

Kylar Raymond, Volleyball,  Colorado Christian University
An outside hitter, Kylar Raymond started her high school career as a swimming letterwinner before switching full-time to volleyball. She has earned two letters on the volleyball court and has been a starter this season, ranking third on the team in service aces (45) and also recording 21 blocks. Kylar was named to the Academic All-District Team last year and is a member of the National Honor Society. The Tigers have not lost a district match during Kylar’s career, and are headed to the 2019 regional tournament. The daughter of Kellie (the principal of Dripping Springs Elementary) and Curtis Raymond, she plans to major in Business in college.  Coach: Michael Kane.

Jayna Reid, Softball, East Central University (Ada, Okla.)
A two-year starter, Jayna Reid was the team’s second baseman in 2018 after playing in the outfield as a sophomore. Last spring she recorded a .360 batting average with 20 RBI, 32 runs scored, 9 doubles, 3 triples and 3 homeruns. She was named to the All-District First Team in 2018 after earning honorable mention as a sophomore. Jayna, who is the daughter of Timberlee and Michael Reid, plans to major in Communications and Public Relations or Sport Management at East Central. Coach: Wade Womack.

Zach Tjemeland, Baseball, University of Texas Rio Grande Valley
Zach was named to the All-District First Team as a pitcher after posting a 5-4 record with 60 strikeouts last year. In 2018, Zach led the team in RBI with 28 and in slugging percentage with a mark of .483. Zach, who also earned academic all-district honors, plays in the summer for the Austin Wings baseball club.  The son of Stefani and Matthew Tjemeland, Zach has also played on the Tiger football team throughout his high school career. He plays to major in Biomedical Engineering at Texas RGV. Coach: Chris Payne.