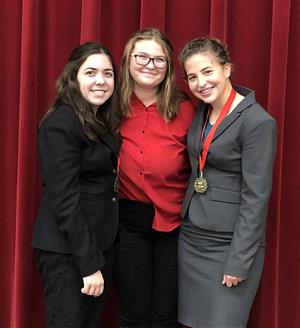 Dripping Springs High School students were successful at the UIL 5A Region 13 Congress Meet on Nov. 11 in Salado. Campbell Melton (right in photo) was the region champion for the second consecutive year and will advance to the state tournament. Lily Claire Kroll (left in photo) placed fourth and is designated as a state alternate, and Shaye Ladzinski (middle in photo) was 10th. The event included the top 20 congressional debaters in the region.

Congress is an individual contest in a group setting that models the legislative process of the United States Congress. Within this mock legislative assembly competition, contestants draft legislation (proposed laws and position statements) submitted to the tournament, and they research the docket of bills and resolutions dealing with real-world social and political policies prior to the contest to prepare their speeches. At the tournament, students caucus in committees, deliver formal discourse on the merits and disadvantages of each piece of legislation, and vote to pass or defeat the measures they have examined. Topics this year included requiring universal background checks for gun purchases, offering aslyum to refugees, halting the production of single-use plastics, protecting Alaska's natural habitats, and increasing awareness of human trafficking victims. Congress is one of several speech/debate events sponsored by UIL; others occur in the spring.

The State UIL Congress Tournament will be held Jan. 14-15 at the University of Texas at Austin and the Texas Capitol Building.

This is the disclaimer text. It should wrap, then the bar will grow in height if more space is needed. The blackboard footer will center if disclaimer is not being used and the background will be one color.
Copyright © 2002-2020 Blackboard, Inc. All rights reserved.